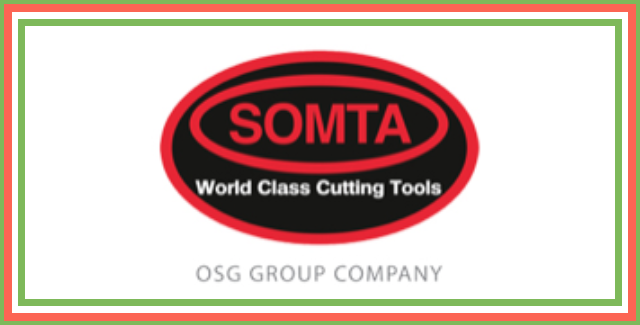 Africa's largest manufacturer of round cutting tools, SOMTA TOOLS and their product line is now available for Distribution in the U.S., with a stocking location in Chicago and at its SOMTA USA Corporate Headquarters in Irving, Texas. Somta Tools is an exclusive OSG Group Company and only limited Distribution will be part of their marketing program. Please contact us for information.

Sockets and sleeves are used for accommodating a MTS tool that has a different shank size to that of the machine arbor.

Reamers are used for finishing a pre-drilled hole to a diameter that conforms to a closer tolerance than the drilled hole diameter. The reamed hole will have a superior surface finish and a closer diameter tolerance than that of a drilled hole. Reamers are used to produce holes which require a specific fit with a mating part.
Countersinks are used for producing a chamfer on drilled or reamed hole, usually to accommodate a countersunk head screw. Counterbores are used for counter-boring a drilled or reamed hole to accommodate a bolt head. Countersinks and Counterbores are available with either a straight shank or a MTS.

The term “shank cutters” is used to loosely refer to a range of tools that have threaded, plain or flatted shank. These tools are generally used in milling applications on vertical milling machines. Shank Cutters are available in regular and long series. Shank Cutter material types are HSS, HSS-Co5, HSS-Co8, HSS-Co8e and Solid Carbide.

These cutters are generally used in milling applications on horizontal milling machines.

Toolbits are manufactured for use in turning applications where the user can grind the required profile onto the tool bit.